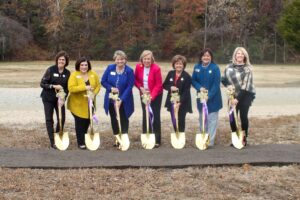 On November 14, International President Mary Ellen Brock spoke at the groundbreaking of the Turning Point Suffragist Memorial in NOVA Park’s Occoquan Regional Park. The memorial, slated to be completed August 2020, will honor the brave women whose courage and commitment led to the passing of the 19th Amendment to the Constitution. President Brock was invited to be an honored guest speaker by the Chairman of the Turning Point Suffragist Memorial, Patricia Wirth. In her remarks, President Brock addressed the history of the suffragist movement and how GFWC played a role in securing women’s right to vote. President Brock encouraged the audience to be proactive and never forget what these women have done. She stated: “Let us never forget how they fought, how they suffered, and how they persevered. Let us always remember to honor who they were. Let us always rejoice what they accomplished. Let us always be thankful for the gift that they gave us. Let us never forget and always remember to pay tribute to them and vote.”

The site selected for the Memorial is where suffragists were imprisoned and kept in inhumane conditions after organizing the famous 1917 march on Washington and protest in front of the White House. Once suffragists were arrested, they were taken to the Occoquan work house. This work house will be dedicated as the Suffragist Memorial, and the Plaza Rotunda will feature a statue of GFWC clubwoman Carrie Chapman Catt.