Making a Difference for 125 Years 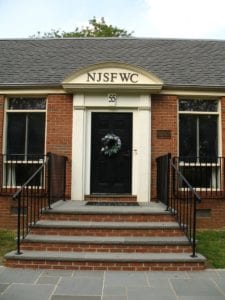 In May 1964, President Lavenia S. Taylor announced at Convention that building a permanent Headquarters for NJSFWC would be the primary project of her administration.

Founded in 1894, the New Jersey State Federation of Women's Clubs of GFWC (NJSFWC), a member of the General Federation of Women's Clubs, provides opportunities for education, leadership training, and community service through participation in local clubs, enabling members to make a difference in the lives of others, one project at a time. There are approximately 8,000 members in 200 clubs located throughout New Jersey.

Too frequently, women’s clubs’ members are described as privileged, white-gloved women with too much time on their hands. Just the opposite is true. Each member has inherited a history of activism on the community, state, national and international level. Now more than ten years into a second century of community service, we look back with pride at the many accomplishments of our clubs and their members, and know that activism is just as alive and spirited today.

In 1918, the NJSFWC founded the New Jersey College for Women (now Douglass Residential College), and through our scholarships to Douglass students, the Federation continues to support this institution with its strong tradition of training tomorrow’s women leaders.

The General Federation of Women's Clubs

The General Federation of Women's Clubs is an international women’s organization dedicated to community improvement by enhancing the lives of others through volunteer service, with members in all 50 states and more than a dozen countries.

Among the many achievements of our members, GFWC is credited with the following: