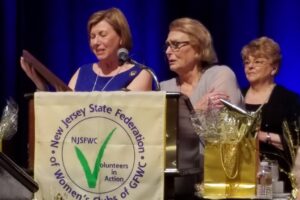 The deadline for nominations for the Cecilia Gaines Holland award is rapidly approaching. To nominate someone from your Club, please download the nominating instructions, found in the Materials section under “Honors, Awards & Achievements.”

The prestigious Cecilia Gaines Holland Award is presented annually to one of our clubwomen in recognition of her outstanding civic activities and accomplishments over and above her Federation involvement. Established in 1944 to honor Mrs. Holland and her exemplary civic work, it is the highest honor that the NJSFWC can bestow on a New Jersey clubwoman. The nominee does not need to be an officer or member of long standing. Clubs are encouraged to participate by gathering information from their members using the form from the website.

Once clubs have selected their nominee they should :

The resumes will be judged by three Past State Presidents after all identifying information is removed. All non-selected previous nominees are eligible to be resubmitted.

The selected nominee is required to be in attendance at the Tuesday night banquet at convention in May in order to receive this award.

Established in 1944, the Cecilia Gaines Holland Award is the highest honor that can be bestowed upon a New Jersey clubwoman. Named after the second President of the NJSFWC, this prestigious award is given annually to one clubwoman who demonstrates her commitment to her community by performing outstanding civic and volunteer work that extends above and beyond her service to her club.

Cecilia Gaines Holland, 1896-1898, from the Odd Volumes Club of Jersey City, was 35 years old when she became the second President of NJSFWC. In 1895, efforts began for the preservation of the Palisades. In 1897, a State Yearbook was published for the first time, and is still the “Federation Bible” to clubwomen throughout the state. The Federation began to request that the Governor appoint a Commission to draft legislation establishing travelling libraries.

Mrs. Holland died at the age of 83 and she bequeathed the sum of $1,000 to be invested by the Board of Directors, and the income from this investment was to be given annually in the form of cash or medal, to a clubwoman doing outstanding civic work in NJ, and is still awarded today.