As we continue this series, we will introduce you to another woman who had the vision to reach for the stars. Please enjoy this series and continue the legacy by supporting the NJSFWC Shining Future Endowment Campaign. Participating in the campaign will assist NJSFWC in its support of Continuing Funds, and building membership. Visit the NJSFWCshiningfuture.org website to make a donation or explore our goals and history. Speakers are available for your club. 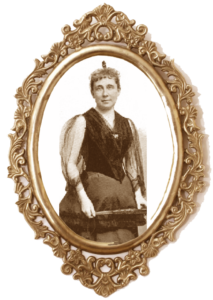 Emily E. Williamson inherited a program well developed by previous administrations. The kindergarten and education committees were incorporated into a Department of Education. More than half of the towns having woman’s clubs had kindergartens.

In 1899 the Daughters of the American Revolution joined the Federation as a State Organization. The Governor promised to prepare a bill to save the Palisades and the committee requested two women be included on the committee. The New York legislature also formed a commission and joined the committee in preparing the bill. With success in sight the Palisades League was formed. Funds were raised to provide a suitable memorial to be placed in the area to be preserved in its rugged “wild” state so that future generations would know the natural conditions at the time of preservation. In 1900 the bill providing for the Preservation of the Palisades finally passed. New Jersey clubwoman received acclaim not only from New Jersey but from the entire country.

She visited orphanages throughout NJ, observing the poor quality of care provided to children there, and went before the State assembly to speak on their behalf. Her efforts resulted in the State Board of Children’s Guardians in 1899, a forerunner of child welfare agencies of today. The foster home system was a direct result of her efforts.

During her tenure, the long-sought legislation providing funds for Traveling Libraries passed in 1899.

Well known as an author of magazine articles, Mrs. Williamson made an outstanding contribution to prison reform and founded the State Charities Aid and Prison Reform, and the State Reformatory at Rahway was largely established through her untiring efforts.

A Proud Legacy ~ A Shining Future

Mrs. Williamson spoke at the Chicago World’s Fair of 1893. The World’s Columbian Exposition, held in Chicago in 1893, was the first critically and economically successful U.S. world’s fair. At the international congress of charities, correction and philanthropies a powerful address was given by Mrs. Emily Williamson whose theme was “private unofficial supervision of public institutions in cooperation with official boards.”*

The committee would like your assistance in reaching out to corporations or individuals who may be interested in this campaign. Please send an email to info@njsfwcshiningfuture.org. Your assistance is appreciated.