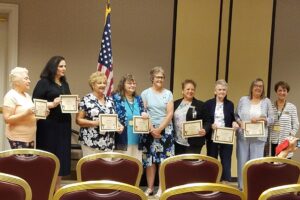 I hope everyone attending the Summer Conference was able to enjoy some summer fun. Congratulations to the Cecilia Gaines Holland awardees, Jane Mackesy and Marie Sullivan. It was nice to finally meet and hear from the Women of Achievement winners. What an outstanding group of women! You can check out their bios on the NJSFWC website under PROJECTS/WOMEN OF ACHIEVEMENT. We were thrilled to have the women from the Associate Alumnae of Douglass College join us once again and to welcome Meghan Rehbein, Associate Dean for Strategic Initiatives at Douglass, who represented Douglass Residential College.

Thank you to the Women of Achievement Patrons. Due to your generosity, we were able to contribute $5,000 to the Douglass Residential College Continuing Education Scholarship.

Congratulations to our Honor Roll and Order of the Lily Recipients. Amazingly enough, there were some surprises indicating some of you can really keep a secret.

The District Vice Presidents showed their creative side when they bragged about all of your activities. And there was a lot to brag about.

We had a total of 147 members in attendance and I personally would like to thank you for your support. I could not have done it without you. Oh and of course, there was Susan Fosdick, Convention Chairman, and her Committee and Cynthia Blumenthal, Credentials and Registration Chairman and her Committee who did an amazing job under unusual circumstances.

The Tribute book was distributed and many thanks to Karen Manneback who did a fantastic job putting it together. Copies will be distributed at upcoming events.

Conference Pictures can be viewed and bought on line. Go to www.jamesphoto.com, click on CLIENT LOG IN, select NJSFWC Summer Conference. Photos will be on line, Saturday, August 7th for 90 days. For more information contact Jen James at 609-994-4886, jen@jamesphoto.com. Don’t miss out on having a memento of this historic conference. For those of you who do not like to write, a picture says a thousand words.

Welcome to the newest member of the NJSFWC, the Junior Woman’s Club of Belleview. We wish them success and offer our assistance and friendship.

Each week in the eConnection we will highlight projects selected for the GFWC reports. These projects can also be found on the NJSFWC website on the MATERIALS page listed under each of the subcategories.

Featured photo shows the Order of the Lily Recipients for 2021. Congrats to all!