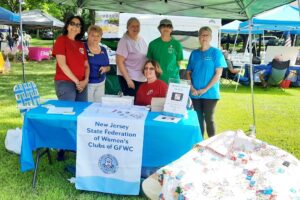 We are not collecting sweatshirts for Operation Chillout this fall. If you would like to donate to their Winter Campaign it can be done through their website. Please consider sending a monetary donation to NJSFWC so that we can give them an awesome donation at next year’s Convention. They have received the necessary permits and are now able to move forward with their tiny house project and your contribution to NJSFWC will help.

I would like to thank everyone who came out to support the Vet Summerfest in VASA Park. We were able to sell our quilt raffle tickets and pins, give an interview on the radio and meet some of the other Operation Chillout volunteers.

It would be great to have a NJ Clubwoman represented among those selected.

January is National Soup Month, and we need your culinary talents! Submit your healthy, best-kept secret soup recipe by Friday, September 17th, for a chance to be featured in the Winter 2022 GFWC Clubwoman Magazine. We’re looking for GFWC members’ original culinary creations of all kinds—broths, creams, purees, bisques, and chowders.

International President Marian St.Clair will review all of the recipes and handpick six finalists to cook and be tasted at GFWC Headquarters. Four of these soups will be published in GFWC Clubwoman Magazine, one President’s Pick and three others selected by Headquarters judges. Each submission should include:

Submit your original recipe by Friday, September 17th, to PR@GFWC.org. With your submission, please include your full name as you would like it to appear in print as well as your club’s name and state. High-resolution (300 DPI) photographs of your prepared soup are welcome but not required.

Each week in the eConnection we will highlight projects selected for the GFWC reports. These projects can, also, be found on the NJSFWC website, njsfwc.org Select Materials then scroll to Legislation.