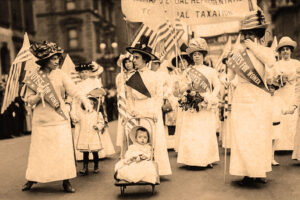 100th Anniversary of the 19th Amendment

The year 2020 marks the 100th Anniversary of the 19th Amendment, guaranteeing and protecting the women’s right to vote. This historical centennial offers an opportunity to commemorate a milestone and to explore its relevance to the issues of equal rights today.

Suffragists began their organized fight for women’s suffrage in 1848 during the first women’s rights convention in Seneca Falls, New York. For the next 72 years, women leaders lobbied, marched, picketed,and protested for the right to the ballot.

During NJSFWC President Ida W. Dawson’s Administration (1906-1908), clubs were studying such topics as American citizenship and Women’s Suffrage. The U.S. House of Representatives finally approved the “Susan B. Anthony Amendment,” which guaranteed women the right to vote, on May 21, 1919; the U.S. Senate followed two weeks later, and then the 19th Amendment went to the states for ratification. Thirty-six states needed to approve the Amendment for it to become part of the Constitution. On February 9, 1920, New Jersey ratified the amendment and finally on August 18, 1920, Tennessee became the 36th and final state needed to ratify. A proclamation declaring the 19th Amendment ratified and part of the U.S. Constitution came on August 26, 1920, forever protecting American women’s right to vote. Today, more than 68 million women vote in elections because of the courageous suffragists who never gave up the fight for equality.

NJSFWC is asking all club members to consider a project commemorating this event with a draft of the following Resolution. GFWC is offering a $100 award to the club who has the best celebration of the 100th Anniversary. Entry forms to come at a later date. Your club can recognize the day with a special project. Here are some ideas that can be done with limited social distancing:

The following resolution may be submitted to your local elected representatives.

WHEREAS, The 19th Amendment recognized the significance of woman’s suffrage, which when ratified in 1920, affirmed the citizenship of more than 26 million women and granted them a mechanism to empower themselves, their families, and their communities; and

WHEREAS, The year 2020 marks the 100th anniversary of the passage of the 19th Amendment and offers an unparalleled opportunity to commemorate a milestone of democracy; therefore

RESOLVED, That (name of municipality or government body) is proud to recognize that the ratification of the 19th Amendment marked the end of a three-generation struggle to win the right to vote, for women; and

RESOLVED, That (name of municipality or government body) supports (name of club)’s (celebration event details) to mark the 100th Anniversary of women winning the right to vote;

Sample of last RESOLVED that would include a project your club will do:

RESOLVED, That Anytown Board of Commissioners supports GFWC Anytown’s 19th Amendment Centennial Festival to be held on the courthouse parking lot, August 16, 2020 from 1:00 pm – 5:00 pm to mark the 100th Anniversary of women winning the right to vote.

Here are two other projects that you can do with your club members or in your community throughout the year:

Please remember to share with this chairman your projects, including photos.

This resolution was passed at the 2020 NJSFWC Convention. The bill requires the Federal Communications Commission to designate 9-8-8 as the universal telephone number for a national suicide prevention and mental health crisis hotline. The Department of Health and Human Services (HHS) and the Department of Veterans Affairs must jointly report on how to make the use of 9-8-8 operational and effective across the country, and HHS must develop a strategy to provide access to competent, specialized services for high-risk populations such as lesbian, gay, bisexual, transgender, and queer (LGBTQ) youth; minorities; and rural individuals.

On May 13, 2020, the Senate Bill S2661 was passed by a Senate vote with an amendment that now designated the bill as S2412 and was then sent to the House on May 14. The bill is currently being held at the House desk. The companion House Bill HR 4194 is now in committee and has no NJ House members co-signing the bill. It is now a great time for us to contact our House members and ask that they co-sponsor this bill.

Here are some points you can outline in your letter:

In your letter, please make sure you designate yourself as a club member of the New Jersey State Federation of Women’s Clubs and that our members have designated this issue as extremely important through a state wide vote involving approximately 6,700 women.

As a benefit to belonging to a federated club the GFWC is planning on 6 informational webinars for later this summer.

We will let you know when dates and access information become available through the eConnection, NJSFWC website and emails to Club Presidents.

Thanks to Claire Hill, NJSFWC Health and Wellness Chairman, for the new U.S. flag donated by Christopher Macaluso owner of PanaLuna Design in Oradell. It was flying at Headquarters in time for the 4th of July.

Check out the Call to MAR by clicking here.