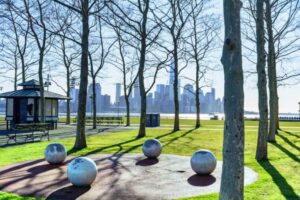 So “Let Our Voices Soar” by letting Governor Murphy, legislators and the Department of Environmental Protection (DEP) know that they must reject Liberty National Golf Course owner’s strategy of offering money toward active recreation in a quid pro quo land grab return for Liberty State Park’s priceless Caven Point Natural Area for three holes of its own private golf course. Show your support for Liberty State Park Protection Act S1449 and A2189 by having your club write letters to your State representatives or write letters individually, making sure that you identify yourself as a member of NJSFWC.

Since 1894 we have worked to protect New Jersey’s Natural Resources from destruction and we must continue the fight. Check out the Friends of Liberty State Park’s website for more information (folsp.org).

1. New Jersey Mission of Honor whose goal is to Identify, Honor and Inter unclaimed cremated veterans with the help of the Veterans Administration. The Woman’s Club of Norwood/Northvale (28 members) heard about this program and contacted them for a presentation at a club meeting. The NJ Mission of Honor group contacts funeral homes, hospitals, crematoriums to locate cremains that have never been buried. They comb the facility’s records to find which are veterans. Local, state and national laws are followed in identification and then try to locate family members. The cremains are placed in a beautiful wood urn with an insignia of the branch of service that the veteran served in. The cost of the urn is $300 and members of the club spent 20 hours in this project and raised, in house, $300 for one urn.

2. The Little Silver Woman’s Club began a new project in 2020 called “Gowns for Military Women” and were recognized by their mayor for their efforts. The 5 members advertised the project in flyers and by word of mouth. They collect gowns, costume jewelry, evening bags and shoes for military wives. This project inspired the military women to open a building on the Joint Base McGuire-Dix-Lakehurst (Air Force, Army & Navy Joint Base) to display the gowns and accessories. The women pay $15 to take home the dress and return it after it has been dry cleaned and they receive their money back. 50 hours were spent receiving $400 in kind donations.

3. The North Brunswick Woman’s Club was contacted by the town’s high school guidance teacher for help with “Operation Home Plate”. Several students and their families were struggling to put food on their tables. The basic needs were unfillable by the local food bank and school food program. The 32 members of the Club heard the guest speaker at a meeting and members were sent a list of these family’s needs. In addition to the original donations, the club also repeated the collection with Thanksgiving baskets. Members put forth the effort in 40 hours, collecting $300 in cash donations and $1,500 worth of in-kind donations.