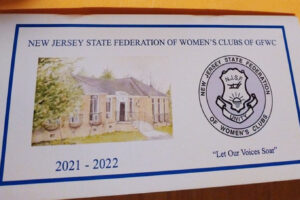 The 2021-2022 pocket calendars are now available for $8.00. You can order one or any other items from Headquarters and picked up from your District Vice Presidents. (Checks payable to NJSFWC add $1 postage for mail requests.)

Please consider joining your fellow club members at your June District Council. Come find out about upcoming plans for the Summer Conference, Day of Service and Fall Conference. Learn about what the State Board does to keep the Federation going. Share your activities and find out what is happening with your fellow club women. Contact your District Vice President who will have the Zoom information.

The GFWC Woman’s Club of Runnemede had 22 stencils made from the best lines of poems from a recent poetry contest held by the Poetry Society of Southern New Jersey Youth Contest. They used spray chalk to put lines of poetry on sidewalks all around town. In addition, a calendar was created using the lines from the poem and is being sold for $10.00 each. The Reimagine Runnemede, a town organization created a pop-up mural and two murals on walls in the Business District using lines from the poems.

The members of the Woman’s Club of Belleville sponsored their district wide poetry contest. Once permission was obtained from the schools, packets were sent electronically to the five elementary schools, one middle school, and one parochial school for grades 4,5, and 6. The theme was “It’s a Wonderful Life.” Fifty-eight entries were returned for judging. The members who served on the committee volunteer 95 hours for judging, preparing certificates, planned the poetry awards via video and shared on social media with the parent’s permission. Letters were sent to winners, parents and teachers inform them of the event’s conclusions.