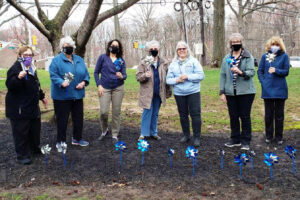 It is time to plant those pinwheel gardens on behalf of Prevent Child Abuse Awareness Month. See above for a picture of the Headquarters Pinwheel Garden.

From Covenant House: This is not for everyone, but if anyone is interested or has a teenager in their life that might be interested, I will reach out to our Club members to see if they would like to be a sponsor.

WHY: To support the youth facing homelessness at Covenant House New Jersey

Sleep Out works like a walk or marathon–you sign up to give up your bed for the night (NO COST TO YOU=NO registration fee or anything), ask family, friends, and co-workers to support your efforts, and then “sleep out” to raise awareness for homeless youth someplace other than your bed.

Join together again the next morning at 8:00 a.m. to share how the experience impacted you. This is NOT just sitting on a Zoom call for 2 hours–you’ll have small breakout groups with kids, hear their stories, be able to interact with the virtual platform, etc. Very inspiring!

The event is focused on the human trafficking area of our work at Covenant House and will be very powerful. Google Sleep Out: Women Unite!

Many women are forming teams and choosing to assemble together and sleep out (in someone’s yard, their garage, etc.)

We have many teams already! $2,000 goal per person but it’s JUST A GOAL-not a requirement. As long as folks raise something by event time (even if they donate to themselves) it’s all good.

We give incentives and matches along the way to boost fundraising efforts. Students are welcomed and have a fundraising goal of $300. We can grant community service hours if needed.

This is open to ANY woman no matter where she is! Please reach out if you have questions!

Thank you to all of the Club members who shared their story. Send in your stories and we will continue to put them in the eConnection.

Florence Spearing Randolph was born on August 9, 1866 in Charleston, SC. To find work as a dressmake, she moved to Jersey City, New Jersey and lived with her sister. In 1892, Randolph joined the Women’s Christian Union. She received her license to preach and was ordained a deacon (one of the first women), served as a delegate and elder of several congregations. When she was ordained a minister, she served as the pastor of the Wallace Chapel AME Zion Church in Summit, New Jersey, from 1925 to 1946. She graduated from Drew University, and was the first African American women to enroll. She was an executive board member of the New Jersey Woman Suffrage Association. Randolph founded the New Jersey Federation of Colored Women’s Clubs in 1915 and served as President for 12 years. She died on December 28, 1951.