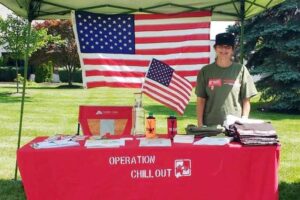 On April 7, 2021 we will have a hybrid workshop (Zoom and in-person) at 10:30 a.m. for training on helping the Operation Chillout Rapid Response team make follow-up phone calls to veterans. You will be trained on how to make a wellness call. If you would like to attend-limited space in-person at Headquarters or via Zoom- contact Patricia Dahl, dahl@njsfwc.org. If you cannot attend the morning session, the workshop will be recorded and will be shown again that evening at 7:00 p.m.

We are collecting gift cards. They are asking for $10 gift cards to either Dunkin Donuts, Wawa, Subway, Quick Check, Mc Donald’s, or Burger King. PLEASE do not send them to Operation Chillout directly. They will need to go to Headquarters so we can keep a count for our records. The gift cards will be then delivered to them. It might be safer to find someone either on the State Board or a member of you Club to deliver them to Headquarters rather than mailing them. Please call Headquarters first before delivering them by a member to be sure someone will be available to let you in. Thank you in advance.

Thank you for all of the notecards, however, we are putting this project on hold until the Fall when Operation Chillout has its winter distribution. Also, the Winter Collection is completed. The next collection will be for their Summer Distribution and will be similar to last year.

NJSFWC is selling Gertrude Hawk Chocolates for Spring. This fundraiser benefits Headquarters. EASTER is early this year. Bunnies, crosses, eggs, lambs, and many other items as well as Fall favorites are available. Need to fill a basket/s, treat yourself, buy a hostess gift? Whatever the reason (you really don’t need one) Order today. Don’t be left out!!! All orders will be shipped directly to your residence. Tax and shipping charges will be applied. If you live close to another member(s), you may want to place one order and split the shipping costs. Sale ends March 28th.

• Go to https://fundraising.gertrudehawkchocolates.com/
• Click on Place Fundraising Order.
• Choose an Organization.
• Type in 114501 CHOOSE NJSFWC, NEW BRUNSWICK, NJ Choose a Seller and type in CHRISTINA
• Select GET STARTED
This should take you to the product page where you can select your items. Any question, call Darlene at 1-800- 706-6275, Ext. 359 or Chris Burlew at 732-885-1466.

The 2021 Convention booking details for the Atlanta Marriot Marquis have been added to the GFWC website. To find the information: (1) visit the GFWC website, (2) click on “What We Do” in the toolbar, (3) click on “Annual Convention,” (4) then click on “Hotel & Travel” in the toolbar to the left. Or, use this link: https://www.gfwc.org/what-we-do/annual-convention/hotel-travel/ To ensure a smooth process, please do not book and hold more rooms than you currently need.

Please note that the official CALL to Convention will be posted on the website on April 1st and that registration will open that day.

Though Lynn Webb’s mother never wanted her to work in a Trucking Company because it was not a proper place for a woman to keep her reputation her father encouraged her. She kept the mechanics in line and never dated them. She only dated the salesmen and this is where she met her husband 45 years ago.

In 1972, she was the first woman at St Paul’s Lutheran Church, Edison to serve on church council for four years without being a secretary. She got the position because her father refused to run against his daughter. Every suggestion she had was voted down by the men on council. She was told by one of the members that the church was not ready for my ideas.

In 1974, she became the first woman to work with a foreman at Paul’s Trucking, Woodbridge. This job was previously a man’s position. She was in charge of the inventory control system that she helped create, checked mechanic work orders, and received phone calls from Pathmark truck drivers who were broken down. It was amazing that she had these drivers “rolling” in one hour after she called the service to fix their truck. The truck service was disappointed that she was not the one broken down. Paul’s Trucking received an Excellence Award to have drivers rolling with less down time. She held this position for five years and left on maternity leave.

Cranbury, New Jersey elected its first woman to the Township Committee in 1974, when 2 women vied for a vacant seat. Cranbury voters elected Patricia (“Pat”) Scott. Scott was sworn in as a member of the Township committee on New Year’s Day 1975 and served for the next 12 years, including three terms as Mayor of Cranbury.¹ Pat moved to Cranbury in 1953. She served as the Secretary for the Township’s Historic Preservation Advisory Committee from 1990 until 1997, often lending her knowledge and suggestions to make sure the “Village Area” maintained its charm, as it is to this day. Under Pat’s tenure, sewer service was made available for the first time to residents and businesses in 1979.

Carol Parks, Woman’s Club of Vineland, when she was in high school in the mid-fifties, wanted to take a mechanical drawing class, but was told it was only for boys. After getting permission from the principal and the teacher she was able to take the class, being the first and only girl.

Toni Morrison was born on February 18, 1931 in Lorain, OH. She was educated at Howard University (BA) and Cornell University (MA). She authored many novels (i.e., The Bluest Eye, Beloved,) essays and was also a book editor. From 1989 through 2006, Morrison was a professor at Princeton University in the creative writing program. She also taught at Howard University and Rutgers University. She was awarded the Nobel Prize in Literature in 1993 (which brought her recognition,), the Pulitzer Prize, and the American Book Award. She was the keynote speaker at the 2011 Rutgers Commencement where she received the Honorary Doctor of Letters degree. In 2012, she received the Presidential Medal of Freedom by President Barrack Obama. She died on August 5, 2019 in the Bronx, NY.