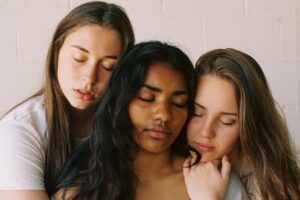 A top ten project from NJSFWC is from the Marlton Woman’s Club. For breast cancer awareness they held a “Decorate a Bra” contest. Eight members participated and bras were later undecorated, and 25 bras were donated to “Free the Girls”.

A top ten project from GFWC is the GFWC Nature Woman’s Club (FL) Pink Out Your Punk’in Contest. The community painted and decorated pumpkins pink and posted pictures on Facebook, where the winning pink pumpkin was chosen by the club. The winner received a $25 gift card and a donation was made in their name to Making Strides Against Breast Cancer.

Does your club have a project for Breast Cancer Awareness Month? Please send the information to Health and Wellness Chairman, Claire Hill, hill@njsfwc.org so we can highlight it in the eConnection. Don’t forget to wear pink.

A top ten project from NJSFWC, GFWC Woman’s Club of Upper Montclair held awareness of Domestic and Sexual violence via the internet and shared articles from the NJSFWC ALMANAC. They held a collection of new socks for the shelter in their area. Fifty pairs of new socks were delivered with an in-kind donation of $180.

A top ten project from GFWC is the Kalamazoo Area Women’s Club (MI) adoption of the Alamo Michigan Department of Transportation (MDOT) rest area on Southbound US 131 to install bathroom stickers offering help for persons who are trafficked. They put stickers on the inside of the women’s bathroom stall doors at the rest area with the National Human Trafficking Hotline.

Thirty-eight members of NJSFWC attended the Middle Atlantic Region Conference (MAR) in Wilmington, DE. Members were able to obtain a pre-Conference dinner to socialize and catch up with old and new friends.

On Saturday morning we took care of the business portion of the Conference including a lively discussion over standing rules. After lunch, Deb Strahanowski, GFWC President-elect spoke and GFWC Chairmen gave mini-workshops. On Saturday night, GFWC President Marian St.Clair gave the keynote speech. On Sunday morning, our Jenny nominee, Jill McDonald, was introduced. This President gave her report on the accomplishments of the NJSFWC and honored Past State Presidents Virginia Zanetich, Cathy Southwick and Past NJSFWC and GFWC Director of Junior Clubs, Kathy Ferrara, in the In-Memorium. At lot was accomplished in the weekend. Hopefully, even more NJ members will join us in Albany, NY for next year’s MAR.

The GCI forms are being revised to make them more user friendly and will be back on the website by the end of the month.