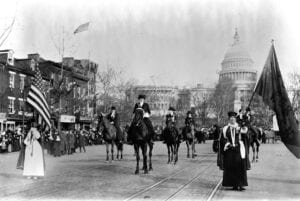 GFWC members were at the forefront of women’s suffrage with a delegation marching in the 1913 Suffrage Parade on Pennsylvania Ave., which began to change public opinion on suffrage. Many of the leaders of the suffrage movement were members of GFWC, including Carrie Chapman Catt, Jane Addams, and Lizzie Crozier French as well as former GFWC Presidents Ellen Henrotin and Sarah Decker Platt.

Join GFWC as we prepare to celebrate the centennial of the 19th amendment, granting women the right to vote! As a part of the 2018-2020 Administration’s “Brand Initiatives,” we’ve asked each club to begin planning projects to celebrate this milestone. In addition to this, we’re asking you to contact your members of Congress to support H.R. 1923 and S. 2427, the Women’s History and Nineteenth Amendment Centennial Quarter Dollar Coin Program Act.

These bills will allow a trailblazing woman to be honored from each state, the District of Columbia, and U.S. territories on the reverse side of the U.S. quarter by requiring the Secretary of the Treasury to mint and issue quarter dollars in commemoration of the Nineteenth Amendment. With the input of the chief executives, general public, and women’s groups and organizations; each state, the District of Columbia, and US territories will have the opportunity to submit a design.

To explore further, check out the following resources: