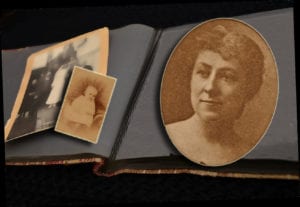 As we continue this series, we will step back in time to introduce you to another woman who had the vision to reach for the stars. Please enjoy this series and continue the legacy by supporting the NJSFWC Shining Future Endowment Campaign. Participating in the campaign will assist NJSFWC in its support of Continuing Funds, and building membership. Visit the NJSFWCshiningfuture.org website to make a donation or explore our goals and history. Speakers are available for your club.

Born January 12, 1861 in Jersey City, Miss Cecilia Gaines of the Odd Volumes Club of Jersey City was 35 years old when she became the second NJSFWC President. Shortly after finishing her term as president, she became the bride of Dr. John Arnold Holland.

In 1895, efforts began for the preservation of the Palisades. In 1897, a State Yearbook was published for the first time, and is still the “Federation Bible” to clubwomen throughout the state.

At the annual meeting in Camden, delegates reported on the progress made with the legislature. Subject for debate was furnishing the NJ Room at Mount Vernon, (pictured), and to cooperate with the Women’s Health Protective Association.

When Mrs. Holland died at the age of 83, she bequeathed the sum of $1,000 to be invested by the Board of Directors. The income from this investment was to be given annually in the form of cash or medal, to a clubwoman doing outstanding civic work in NJ, and is still awarded today. Click here for Cecilia Gaines Holland Award details.

Women Who Reach For The Stars Committee

The committee would like your assistance in reaching out to corporations or individuals who may be interested in this campaign. Please send an email to info@njsfwcshiningfuture.org. Your assistance is appreciated.