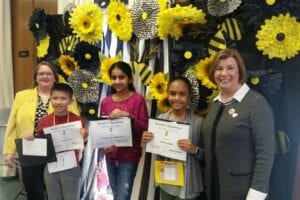 The New Jersey State Federation of Women’s Clubs is proud to announce the Top 3 winners of the State Spelling Bee, held on Saturday, March 9, 2019, at NJSFWC Headquarters on the campus of Douglass Residential College at Rutgers University in New Brunswick. After ten rounds to determine the first and second and third place finalists, “chaotic” was the winning word. The winners are listed as follows:

1st Place: Douglas Gee
Douglas is from Westfield and is a 5th grader at McKinley Elementary School. His local bee was sponsored by the Junior Woman’s Club of Westfield and he was a finalist in the Liberty District Bee. He received a $100 VISA gift card.

2nd Place: Sanjana Sri Veggalam
She is from Parsippany and is a 5th grade student at Mt. Tabor Elementary School. Sanjana’s local bee was sponsored by the Woman’s Club of Parsippany-Troy Hills and was a finalist in the Highlands District Bee. She was awarded a $75 VISA gift card.

3rd Place: Ysabel Godet
A resident of North Brunswick and is a 5th grader at St. Bartholomew’s, she won the local bee sponsored by the East Brunswick Woman’s Club and was a finalist in the College District Bee. She received at $50 VISA gift card. 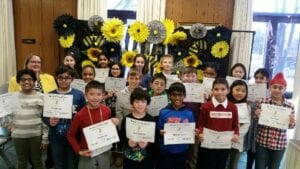