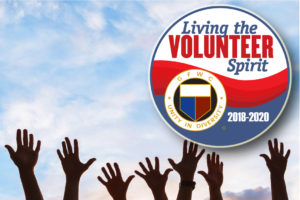 Over the past month, our New Jersey Clubs have been featured as Volunteers in Action in the GFWC blog for their outstanding volunteer efforts. Click here to go to the GFWC blog.

With so much in the news about human trafficking, the Parsippany Woman’s Club (New Jersey) decided to help with the S.O.A.P. (Save Our Adolescents from Prostitution) Project, a hands-on outreach to fight sex trafficking at large events and in communities. After purchasing a case of 1,000 bars of soap, members of the club got together and put “hotline” labels on each bar of soap. The soap was then given to a representative from a local group that collaborates with the New Jersey Coalition Against Human Trafficking (NJCAHT) for distribution to area hotels. 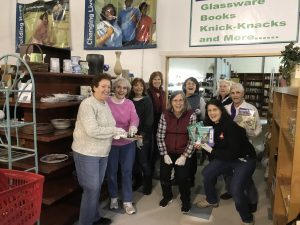 The GFWC Woman’s Club of the Denville-Rockaway (New Jersey) women volunteered for the fifth year in a row at the Habitat for Humanity Restore. They cleaned shelves, restocked, and replaced items on the floor.

The Woman’s Club of Point Pleasant (New Jersey) held a very successful Day of Service despite the zero degree wind chills. They wanted to do something for several more of GFWC’s Seven Grand Initiatives, and succeeded with projects that related to Soles4Souls, the Legislative Action Center, and women in the military. Club members joined members of the community in a variety of service projects at their clubhouse. Projects ranged from simple collections of various items to more involved hands-on projects. Projects included: food collection for poor, collecting shoes for Soles4Souls, collecting linens for the pet shelter, writing valentine notes to women in the military, making blankets for CASA, creating tray favors for nursing home, Capes 4 Kids, Legislative Action Center, making birthday bags and collecting used cell phones for domestic violence shelters, crocheting squares for an afghan, distributing directions for preemie hats and stocking for soldiers.

The Haddon Fortnightly (New Jersey) made snuggly fleece blankets for the foster children in the Court Appointed Special Advocates of New Jersey. Members and their granddaughters made 2 dozen blankets for the children of CASA, which is the Special State Project of the New Jersey State Federation.

The Woman’s Club of Parsippany Troy Hills (New Jersey) recently held its Fourth Annual Spelling Bee. Twenty-five students were selected from local fifth grade classes to participate, with over 100 audience members. Mary Ann Coyne, club member and chairman of the event, was moderator. Club member Marianne Burke was the pronuoncer. After twenty-five exciting rounds, the top three winners were declared. They are invited to participate in the New Jersey State Federated Women’s Club Regional Spelling Bee on February 2, and regional winners will then be invited to the State Championship at the New Jersey State Federation of Women’s Clubs of GFWC Headquarters on March 2nd. These events give students a chance to shine and show off their spelling skills!