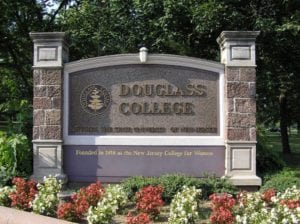 The New Jersey State Federation of Women’s Clubs founded Douglass College in 1918 and we’re proud to share this milestone occasion with them.

What began in 1911 as a campaign to get women admitted to Rutgers College, then an all male school, came to fruition on September 18, 1918, when the New Jersey College for Women opened its doors to 54 adventurous young women.

At a District Federation meeting in 1911 Mrs. John V. Cowling, NJSFWC Chairman of Education, advocated the speedy admission of women to Rutgers College on the grounds that, as a state college, Rutgers received large sums of public money that ought to be used to educate ALL the youth of the state regardless of their gender. Almost immediately, the goal shifted to the creation of a college for women.

For eight years, the women of the New Jersey State Federation of Women’s Clubs, under the leadership of Mabel Smith Douglass, President of the College Club of Jersey City and the first dean of New Jersey College for Women, planned, agitated, lobbied as high as the White House and raised money through a remarkable one-dollar subscription plan. So vigorous was the campaign that one of the Rutgers trustees, who attended a meeting in April 1918 at which the establishment of the coordinate women’s college was approved, argued with some force that “It is better to have 20,000 women with us and not against us”!

What the women of the Federation helped to create was not a teacher’s college or vocational school but, in the words of Dean Douglass, “A true college for women”, offering a traditional liberal arts education.

The first year of life of the New Jersey College for Women was a difficult one—without a faculty of their own, 11 of the 16 faculty members of the Rutgers staff donated their services with virtually no compensation. The students and faculty had to contend with a flu epidemic, no small matter in 1918, and in mid-winter, the furnace broke in the building which housed the college. However, in spite of all of these and other early challenges, the first class graduated in 1922 with 5 of the graduates being elected to Phi Beta Kappa.

In 1956, New Jersey College for Women was renamed Douglass College in honor of Mabel Smith Douglass.

Although the number of women’s colleges has dramatically decreased from 268 in 1960 to 38 in 2016, Douglass continues to flourish.

Today, as stated in its Mission Statement: Douglass Residential College is an intellectual community for undergraduate women within Rutgers University that inspires its students to learn, lead, and live, with conviction, creativity and critical insight.

Congratulations Douglass College, as you Celebrate the Power of 100 Years!