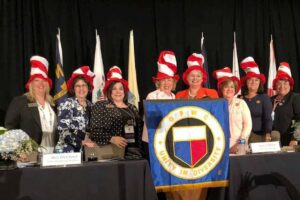 Initiative #2 – That 1,000 projects would be done for Women in the Military.  To date: 799 projects completed

Upon announcing that 4 of the grand initiatives had been reached, and amid cheers of “Let’s Go Higher!”, President Brock set new goals for the following:

Initiative #6 – That 40,000 pairs of shoes will be donated to Soles4Souls and Nike Reuse-A-Shoe programs.  To date: 36,763 pairs of shoes have been donated

Three new goals have been set for the second year of this administration.  Called the Brand Initiatives, they are:

Brand Initiative #3 – That 1,000 club/state projects will be in place to celebrate the 100th Anniversary of Women winning the right to vote, August 26, 2020.

NJSFWC of GFWC President, Mary Wolfe, congratulates and thanks all of the clubs that were a part of these fantastic totals.  She looks forward to seeing what will be accomplished in the new club year.

As Dr. Seuss’s the Lorax states: “Unless someone like you cares a whole awful lot, nothing is going to get better, it’s not.”