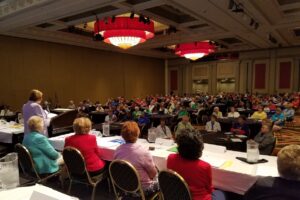 Hundreds of clubwomen celebrated 125 years of service to our communities, the State of New Jersey, and the GFWC. We enjoyed three days of friendship, informal workshops, exhibits, awards, and the annual business meeting of the NJSFWC.

The 2019 Convention was May 6-8, 2019 at the Golden Nugget Atlantic City. The Convention theme “Celebrate a Proud Legacy” paid tribute to the 125th anniversary of the New Jersey State Federation of Women’s Clubs of GFWC. There was a full agenda, and many joined in the Federation Friendship events to complete the mission to Enlighten, Educate and Entertain.

A District Lunch gave members the opportunity to hear the District Vice Presidents report. Each DVP selected a color to represent her District, so this was a colorful event.

The opening Business session included Presentation of the National Colors by Barnegat High School ROTC Color Guard, all female, followed by Reports of the Officers. Bylaws amendments were approved and Awards were given for Best Reported Work. Keynote Speaker was Deb Strahanoski, GFWC First Vice President.

Monday evening began with a social hour open to all attending, followed by a delicious banquet. The evening’s traditional EX Club tribute was themed “Power of the Past – Force of the Future.” Finally, the Federation acknowledged this year’s Women of Achievement award recipients.

The Business Session in the morning included voting on proposed Resolutions and awards for the Best Reported Work in the state. Keynote Speaker was Barbara Schaaf from the NJSFWC’s Special State Project 2018-2020, Court Appointed Special Advocates, CASA NJ.

In between sessions members stopped by the vendor room. There were new and returning vendors, and for all things Federation, the Federation Sales table.

There was also time to visit the Federation exhibits: Arts Creative, Conservation and Communications, to view the entries entered by fellow clubwomen.

Then it was time to head to the Theatre for a 2:30 p.m. start of the annual Arts Performing show presented by District clubwomen selected from across the state. There was much laughter and a few tears during the singing, dancing, comedy, and drama.

Again there was a social hour prior to the evening’s banquet. The theme for the evening was “125 Years of Purpose and Passion.” We honored our Club Presidents with a procession. After dinner Keynote Speaker Mary Ellen Brock, the GFWC International President and former NJSFWC President, touched hearts with her speech about the road less traveled, the Federation Road.

The Cecilia Gaines Holland Award was presented to Terry Cavanaugh.

There were four Workshops offered in the morning at 8:00 a.m., before the start of the closing business session.

The business session included the In Memoriam and the induction of clubwomen to the Honor Roll and Order of the Lily. Guest speaker Pat Wirth shared the details of the future national monument in her presentation, Turning Point Suffragist Memorial.

The Annual Convention closed with a recitation of The Collect for Clubwomen and singing of “Let There Be Peace on Earth.”

The New Jersey State Federation of Women’s Clubs (NJSFWC) of GFWC, was founded in 1894 and has been headquartered on the Douglass Residential Campus, formerly Douglass College in New Brunswick since 1966. The Federation is a member of the General Federation of Women’s Clubs (GFWC), the oldest and largest nonpartisan, nondenominational woman’s volunteer service organization in the world. Opportunities are provided to women in education, leadership training and community service through participation in local clubs, enabling members to make a difference in the lives of others, one project at a time.